Today’s article, “Reading Images,” by Gunther Kress and Theo Van Leeuwen, they go into further detail about how various elements of an image can affect it’s overall meaning.

They begin with explaining the importance of an image’s composition, which establishes three important factors of an image: information value, salience, and framing.

An example of these elements of imagery would be in print publications, such as magazines. Magazine layouts generally have a common set-up according to Kress & Leeuwen, “on such pages the right seems to be the side of the key information, of what the reader must pay particular attention to, of the ‘message’ – whether it is the invitation to identify with a role model highly valued in the culture of the magazine or something else; for example an instance of what is to be learned in a textbook” (185).

This image above, is an example of a typical magazine showcasing some of the features our reading discussed. It has the image on the left, with a brief intro to the story and a headline. However, most of the vital information is located on the right where there is more detail and description.

Another interesting layout Kress & Leeuwen discuss is in broadcast communication, specifically in media interviews. They discuss the “Given-New structure” in which the given information, or what the reader/viewer already knows, is located on the left side and the new information being transmitted is located on the right side.

Take for example this still from a Today Show interview where Matt Lauer was intervieing Kanye West: 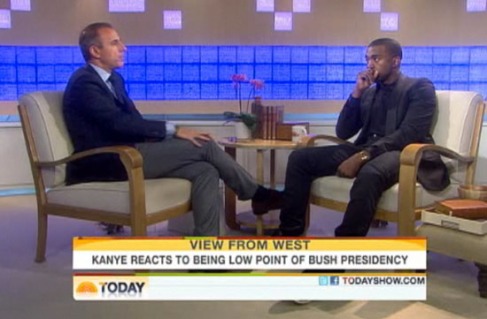 1) Do you think the composition of an images is influenced by the culture?

2) What is the most prevalent aspect of an image that catches your attention first?